Now she knows we are definitely on the road to nowhere

While the gossamer of time unwound itself, Mr Earnest did a controlled slit of her wrist. She felt nothing as it was numb.

Here was the man who scared her, from the minute she set eyes on his warm and welcoming smiling face it was trepidation all the way.

Nothing could disguise his intentions. Nothing could hide his erudition in whatever it was he did and he was going to do it to her.

She could sense he was coming for her body and something was going to happen to it, she knew not what.

He left a shadow long and everlasting but now:

the negative space in her brain is being filled. Now she is acquiescing voluntarily. Now she knows he is not the enemy. 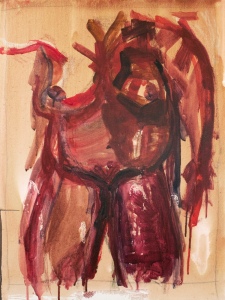 Ancaeus’ attack on her was no mere coincidence it brought her back here to amend her apprehension and volatility.

Her body lay there as a relief, her stomach palpitated and undulated finding comfort from the steel tools thrown on it by Mr Earnest.

The  past three days were not all for nothing where one man said this and another that. She said that and this. Steel in withdraw, test, result, blood, sweat, tears, pain.

He severed the artery, a hot gurgle sprouted forth a warmth on her palm.

A wave of his fingers.

Isn’t life all signifiers and symbols she thought?

Secret and open, direct and indirect speech acts, like the hand of God guiding this vermiform through to her heart.

Looking at a beating heart while simultaneously probing it, searching for tell tale signs of corrosion.

Her favourite mental motif now exposed here on an xray. 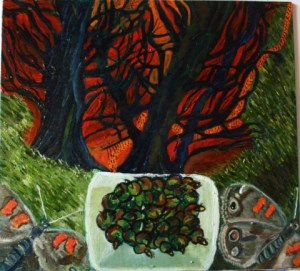 Not as sensorious as the imagined original solid fixed kiss planted to open the flow was.

Now there was nothing.

Or maybe attention is critical.

She listened to silence it removed her from hells landscape.

This mortal portal goes on expedition with the magical hands of knowledge.

Then: you are going to feel a warm sensation.

Slightly edgy then softly a flow of warm baby bath tepid liquid ran from her wrist and swirled around her torso. A pressure on her bladder like an oil drill striking liquid gold concentrated her mind.

The hollowed wire filled with mordant fluid scurried off to find the light and dark. Soothing like a deep cleanse she waited. Ticking and clicking sounds. Movement above her an orb descends and retracts.

Foreboding or sinister it was not.

Then she asked him………